Biology, the Sexes and the Course of History 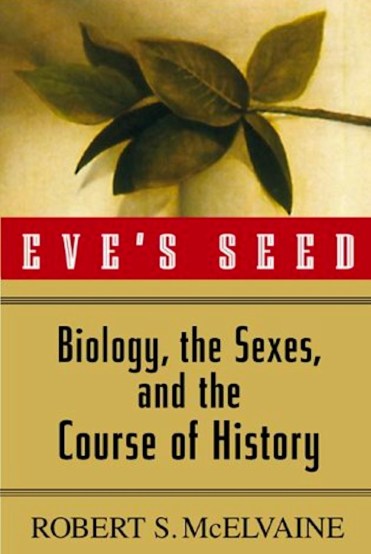 “Eve’s Seed is a bestseller waiting to be discovered: a package of sex, science and species’ vanity nicely wrapped in sparkling prose.”

“As Marx turned Hegel upside down, so McElvaine overturns, among others, Aristotle, Marx, Freud, and even Darwin in showing us how biological and cultural evolution need no longer see men and women as opposites or unequal. Eve’s Seed is a revelation, engagingly and imaginatively written and . . . filled with fresh and challenging interpretations.”

“Written with passion, wit and insight, this accessible book throws down the gauntlet to academics and nonspecialists alike, daring a radical rethinking of the basic ‘truths’ on which cultures have been constructed.”

“This impressive book . . . will provide [an] invaluable source of inspiration . . . regarding the huge issue of male/female roles and their impact on us. It’s about time someone put men in their proper place: on the bottom.”

“I still recognize a powerful, learned and provocative work when I see it!  This is a radical revision of traditional views of human history … a real eye-opener!”

“Eve’s Seed is a truly remarkable book, probably the most thought-provoking book I’ve read in years. . . . a marvelous book.”

“After reading Eve’s Seed, you’ll never look at a farm, the Bible, feminism, rock ’n’ roll lyrics, mass consumption, or Bill Clinton in the same way.  The two groups this book will appeal to most are men and women.”

“A new field is stirring into life [with Eve’s Seed].”

Eve’s Seed has been hailed by several major thinkers as a revolutionary work of major importance in how we understand human development, history, religion, and the sexes. William H. McNeill, the founding father of the concept of world history, calls Eve’s Seed “a powerful, learned and provocative work” that “is a radical revision of traditional visions of human history.”

In a rare case of agreement, feminist pioneer Betty Friedan and Harvard sociobiologist Edward O. Wilson both see Eve’s Seed as a ground-breaking work that will change the way we see the human condition. “Eve’s Seed signals a significant paradigm shift,” Friedan wrote, and Wilson said, “a new field is stirring to life” with the book.

In a starred review, Publishers Weekly said that McElvaine’s “challenging overview” is “daring”: “Written with passion, wit and insight, this accessible book throws down the gauntlet to academics and nonspecialists alike, daring a radical rethinking of the basic ‘truths’ on which cultures have been constructed.”

McElvaine argues that because women can do certain things that men cannot—carry and give birth to offspring and nourish them from their bodies—many men have experienced to varying degrees what psychoanalyst Karen Horney termed “womb envy.” Such insecure men have long attempted to define manhood in terms of complete opposition to womanhood. A “real man” has been seen in most cultures as “notawoman.” To counterbalance the biological “no-man’s lands” of pregnancy, birthing, and nursing, men create artificial “no-woman’s lands.” To compensate for what men cannot do, they tell women they may not do other things. Which areas women are excluded from vary from culture to culture, McElvaine writes, but they have usually included the clergy, politics, the military, and most of the business world.

Among McElvaine’s contentions are that the invention of agriculture—which he believes was almost certainly accomplished by women, who were responsible for the provision of plant food in hunter-gatherer societies—disrupted the long-standing roles of the sexes and, over a period of time, devalued the traditional male roles, especially hunting. McElvaine begins the book by saying that if he had to sum up human history in a single sentence, it would be: “Hell hath no fury like a man devalued.”

Ultimately, the McElvaine Thesis maintains, agriculture provided men with a metaphor—seeds planted in the furrowed soil seemingly being analogous to men “planting” semen in the furrowed anatomy of a woman—that enabled them to claim that males are the sex with creative power: the authors of new life who therefore have authority over women. It necessarily followed that the Ultimate Creative Power, God, must also be male. This prehistoric mistake has, McElvaine says, enormously influenced all of history.

Among the key points in the McElvaine Thesis are:

■ Because men cannot compete with women’s capabilities in the crucial realms of reproduction and nourishing offspring, McElvaine argues, men generally seek to avoid a single standard of human behavior and achievement. They create separate definitions of “manliness” which are based on a false opposition to “womanliness.” A “real man” has been seen in most cultures as “notawoman.”

■ Although this viewpoint actually begins with “woman” as the “standard” human and proceeds to define “man” by its supposed vast differences from that standard, people do not like to see themselves in negative terms, so men have generally sought ways to transform woman into a negative, thus making man positive.

■ Human life—and the situation of both sexes—was radically changed about 10,000 years ago by the invention of agriculture, which in all likelihood was accomplished by women.

■ In one of his most striking contentions, McElvaine says that the story of Adam and Eve in the third chapter of Book of Genesis is an allegory for the invention of agriculture by women (Eve’s eating from the Tree of Knowledge) and its long-term consequences (the loss of what seemed in distant retrospect to have been a pre-agricultural paradise in which people lived easily, without work, simply picking fruit from trees, and man having to go forth and till the soil to earn his bread by the sweat of his brow).

■ McElvaine says that the development of methods for the intentional production of food (animal herding as well as agriculture) substantially devalued what men had traditionally done. Hunting was no longer needed and defense against other species declined in importance.

■ At this point, McElvaine argues, there arose an almost irresistible metaphor, the very widespread acceptance of which has misshaped human life through all of recorded history. The apparent analogy of a seed being planted in furrowed soil to a male’s “planting” of semen in the vulva of a female led to the conclusion that men provide the seed of new life and women constitute the soil in which that seed grows. This Seed Metaphor, which McElvaine calls “the Conception Misconception,” has remained with us throughout history and it continues to mislead us in profound ways down to the present.

■ The belief that men have procreative power led inevitably to the conclusion that the supreme Creative Power must also be male. The toxic fruit that grew from the Seed Metaphor, McElvaine says, was male monotheism.

■ The combination of the belief that God (or the god who is the ultimate creator) is male with the notion that humans are created in God’s image yielded the inescapable conclusion that men are closer than women to godly perfection. Thus the line from the misconceptions about conception emanating from the seed metaphor to the belief, given its classic expressions by Aristotle, Aquinas, and Freud, that women are deformed or “incomplete” men is clear and direct.

■ The total subordination of women throughout recorded history, McElvaine argues, is but the first part of the devastating legacy of the Neolithic backlash and the Seed Metaphor. Equally important has been the concomitant suppression in men of all values, ideas, and characteristics associated with women and so defined as inferior. The rest, he says, is history—pretty much all of it—and, the gains of women in recent decades notwithstanding, these legacies from mistaken ideas in the Neolithic Age continue to have enormous effects on us today.

This is a text widget, which allows you to add text or HTML to your sidebar. You can use them to display text, links, images, HTML, or a combination of these. Edit them in the Widget section of the Customizer.
Loading Comments...
%d bloggers like this: